An Age-Old Dating Conundrum: Who Should Pick Up The Check?

This is a tough one. Traditionally it has been expected that the guy should cover the cost of dinner when on a date. But, as in all areas of life, traditions fade gradually over time. With the rise of feminism and female empowerment, the issue is less clear cut today than it has ever been. Should a guy pay heed to an old chivalric obligation and foot the bill, or should a girl seek to be treated as an equal partner and split it? 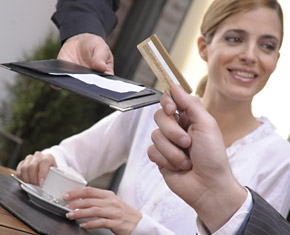 In an effort to find some kind of consensus as to how the deal should go down, we asked a varied selection of men and women the simple question, “What’s your policy when it comes to picking up the check on a date?” After reading what our interviewees have to say you’ll be armed with some fresh insight to take with you on your next date!

A common response that came from the men we questioned went something like “the guy should always offer to pay.” If he offers to pay, he shows that he cares, but is willing to allow his date to make up her mind for herself. But this scenario still implies that the guy is in control of the situation. Is that agreeable for most women?

From those we spoke to, it seems so. “I personally prefer that the guy pays for the first date. I’m kind of traditional,” said one. Another expanded on this: “I like a guy who is willing to pay for the first two or three dates. I’m a little traditional and I don’t mind being shown that he’s putting in the effort. But on any date after that and I prefer to split the bill.”

So it seems many people prefer to at least pay lip service to tradition. But then the question becomes, how should a girl respond when the guy offers to pay the bill? Should she accept outright, make a quick offer to pay before accepting, or insist that the bill should be split?

“I’ll usually make some kind of counter-offer, like “I was thinking we might go out for coffee or drinks next time. Why don’t I cover that, and we’ll call it even?” said one of the women we asked. An interesting strategy, but this of course is assuming that the date went well, which we can all agree doesn’t happen all the time.

“As a girl I always offer to pay my half, if they say no I offer once more. If they still say no, then I offer to cover the tip or buy dessert later.” This was representative of a more common answer to our question. “I also keep the rule that if I can’t afford to cover my half then I don’t go on the date,” she added.

A few people had some rather interesting policies of their own. “If I ask anyone to have dinner with me, I always offer to pay, regardless of the situation,” one guy said. A couple of people shared this view, with another agreeing, “Whoever does the asking should pay, unless it’s a blind date or an internet first meet, in which case it should be split.”

As happens a lot these days, someone had to bring up the economy: “These days, it should be the employed one – or, if both are employed, the better paid one – who pays, unless they’re splitting.” Another girl added, “When means to pay are unequal I am a fan of switching, where the wealthier person pays for the more expensive dates which alternate with cheap dates – so fancy restaurant one night, pizza and a movie the next.” This implies that both parties are aware of each other’s pay grades however, which isn’t always likely to be the case on most first dates, and could lead to an awkward conversation.

A few quirky responses aside, the consensus seems to be that men should offer to pay, and women should either accept graciously or insist upon splitting it – either option is fine in most cases. Most of our guys didn’t seem put out by this either, unless their date is rude about it. “I am willing to pay for the first three dates, but if she doesn’t at least reach or offer, then that says a lot of negative things to me,” one man said. The general rule seems to be that the guy will pay for the first few dates until both become more acquainted and the issue of who pays what is no longer so awkward.

So, in spite of how far we have progressed and modernized as a society, the dating game seems to be the last haven of chivalry, where men can and should make their lady feel a little bit special for the night as they wine and dine together. That’s not such a bad thing, is it?

Posted by Mirela Gluck at 07:02 AM
bargain news , Points of View , Relationships |