It’s time to put male behavior under the microscope again. We all know that relationships take a lot of hard work to keep them from going the way of the dodo, and the simple fact is some of that hard work involves telling quite a few lies. If you think about it, were you to tell your partner the truth 100 percent of the time – in every little situation – fractures would likely develop in no time. Of course you could be one of the lucky ones who doesn’t have to play mind chess on a daily basis, but for most of us a few little fibs are required to keep things well oiled and running smoothly. 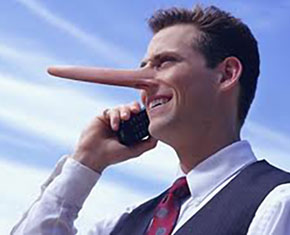 It appears us men are particularly notorious for telling these “little” lies. Quelle surprise! In acknowledgment of this time-honored marital tradition, I have compiled a list of the top 5 lies men tell their partners.

We men are infamously tardy, often failing to arrive at the appointed time, time after time. What makes this even more annoying, from the ladies’ perspective, is that we are sure to be on time for guy time, whether it’s going to the bar, a game or out for a round of golf. But, as with many of the lies on this list, the false “I’m on my way” line is usually used out of fear of disappointment or reproach rather than any intent to deceive. Unfortunately it’s a dumb tactic, because when a man lies to his partner about being on the way when he’s not, he is merely prolonging the inevitable argument that will occur when he turns up unfashionably late. Foresight can be a bit of a blind spot for some of us guys, alas.

Ah, good old passive aggression. There’s possibly nothing quite as irritating as this particular brand of emotional warfare. Women are very good at guessing when something is troubling us, but a man will still persist with this pouty one liner, even when he knows his mind has more or less been read. Often it’s a pride thing, where a guy doesn’t want to drop his guard and show a weaker side to his girl. Most men can’t articulate or express their emotions in the same manner women can, which in turn can be hard for women to accept, who think their partner is just being difficult for the sake of it. He should open up more as the relationship goes on and you grow more comfortable and compatible as a couple. If you’re in for the long haul, you just have to bear with us and our little foibles ladies!

3. I love your friends

This can be a particularly fractious one. Even if you and your man are the most compatible thing since gin met tonic, there is no guarantee that he is going to find the same kind of connection with your friends, and likewise you with his. Nonetheless he will rarely come out and say “your friend’s voice makes my brain melt, and not in a good way” or anything to that effect. Because we men are such a caring and considerate bunch, we will usually struggle on and try to accept your friends for who they are – because they make you happy, and that should make us happy too. The hope is that, in time, they will grow on us and become our friends too. You should never come between a girl and her friends, that’s a golden rule many men have learned the hard way.

A very common lie, this one. Nine times out of ten a guy will genuinely be telling the truth here – he is attracted to you as the woman he loves after all (hopefully anyway, or you might have a teeny bit of an incompatibility problem on your hands). But the fact is no person looks good all of the time, not even the most beautiful of women. However no sane guy will ever say “bleugh, you look awful.” Women in general take far more care of their appearance than most men, so to shatter a girl’s confidence like that would be downright cruel, even we know that. So don’t blame your man the next time your girlfriends tell you your pants are on backwards – this lie was told because he loves you (and maybe a little bit because he is scared of you)!

1. I never think about other women

It’s not something many of us want to accept when we are in a committed relationship, but both men and women can still appreciate a good looking girl/guy, even when they are madly in love with a special someone. Of course, if a guy wants to keep his sensitive areas intact, he will never admit to any external attraction. Rest assured however, because most guys would never act on any of these primal desires. For a poor analogy, take sports teams. You can be an absurdly committed Yankees fan, but still appreciate that other teams have good players even though you would never dream of switching your allegiance to another side. The male marital mantra should be “look but don’t touch” – another golden rule for any good boyfriend or husband to live by.

Fell free to let me know if I’ve left any big ones out, or if you think your man is an angel who none of the lies on this list apply to! In any case, the important thing to remember is that if your guy is prone to committing one or all of the above lies, he is most likely doing it because he really cares about you.

Posted by Mirela Gluck at 01:21 AM
bargain news , Points of View , Relationships |