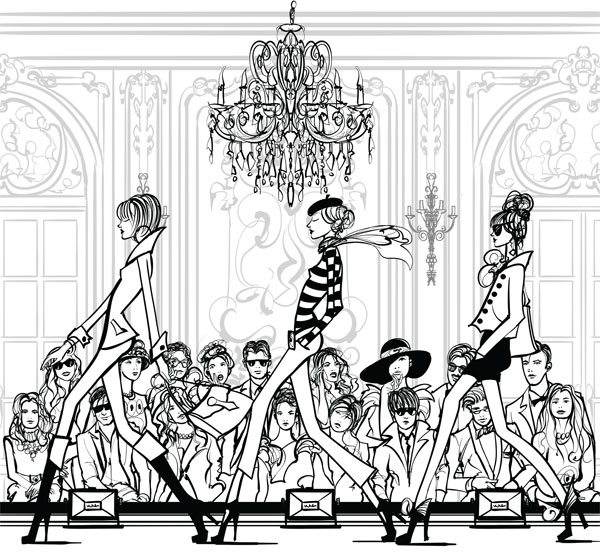 Do you remember when Miranda Priestly says this in The Devil Wear Prada?

‘This… stuff’? Oh. Okay. I see. You think this has nothing to do with you. You go to your closet and you select… I don’t know… that lumpy blue sweater, for instance because you’re trying to tell the world that you take yourself too seriously to care about what you put on your back. But what you don’t know is that that sweater is not just blue, it’s not turquoise. It’s not lapis. It’s actually cerulean. And you’re also blithely unaware of the fact that in 2002, Oscar de la Renta did a collection of cerulean gowns. And then I think it was Yves Saint Laurent… wasn’t it who showed cerulean military jackets? I think we need a jacket here. And then cerulean quickly showed up in the collections of eight different designers. And then it, uh, filtered down through the department stores and then trickled on down into some tragic Casual Corner where you, no doubt, fished it out of some clearance bin. However, that blue represents millions of dollars and countless jobs and it’s sort of comical how you think that you’ve made a choice that exempts you from the fashion industry when, in fact, you’re wearing the sweater that was selected for you by the people in this room from a pile of stuff.

Well, The Devil Wears Prada is not as fictional as you may think it is. In fact, what Miranda says here is a quite accurate description of the fashion industry’s grip on our real world—sans Meryl Streep at the top of the food chain.

Whether you’re aware of it or not, everything we wear has been at one point selected by “Nuclear Wintour” or one of her acolytes. You are most likely familiar with the formidable Dame Anna Wintour, editor-in chief of Vogue, Condé Nast artistic director and editorial director and Met gala host. The woman is unstoppable and the shadow of her power stretches well beyond fashion into the  very fabric of our lives, skillfully manipulating not only what we wear, but who we like or dislike, who we vote for, who deserves our forgiveness and who doesn’t.

While I am not a personal fan of the unapologetically power-hungry Ms Wintour, I can’t help but admire her skills and, to be honest, simultaneously fear her influence. If you think you’ve escaped her influence, think again. Bargain hunting, sample sale shopping, and being the smartest consumer may give you a false sense of power; but the truth is your choices are not free from her influence either.

Take the upcoming Marchesa sample sale for example. The label was co-founded by Georgina Chapman, the wife of now “persona non grata” Mr. Weinstein who was instrumental in its success.  Ms. Wintour has been known through the years to promote Mr. Weinstein’s stars of his films on the cover pages of her magazine and by often featuring Marchesa frocks in its pages. She was responsible for giving the nod of approval to celebrities wearing the label to the Met gala—meaning she’s been responsible for making people like us want to look just like them.

When Hollywood was rocked by allegations against Harvey Weinstein in October 2017, Anna skillfully distanced herself from her long-time friend and his behavior with a statement that read “Behavior like this is appalling and unacceptable,” but stood by his wife saying, “My heart goes out to them[victims], as well as to Georgina [Chapman] and the children.”

After an appropriate time for the dust to settle, Anna has started the rehabilitation of the Marchesa label using her recent guest appearance on the Colbert show to declare her support for Scarlet Johansson’s decision to wear Chapman’s label at the Met gala: “She wore it as a statement that Harvey Weinstein’s wife, who is partners in this company, shouldn’t be punished for the sins of her husband.”

Of course she supported Johansson. It was likely her idea! It’s well known that celebrities need Anna’s approval for what they wear at the gala, so we’ll safely assume Scarlet Johansson’s decision had something to do with Anna’s campaign to save the Marchesa label.

And here we are—many of us believing ourselves to be quite separated from celebrity culture—excitedly grabbing a dress during our lunch break at the Marchesa sample sale in preparation for the fifth wedding this season (ugh), naively thinking that our choice is dictated exclusively by our extraordinary sense of style and our limited budget. Oh, how wrong we are; the dress we picked, its color or style had at one point won Anna’s approval, and the power of the label (and its mere existence) depends on her willingness to support it.

That might make you feel powerless, but you can only be powerless if you lack awareness. With awareness, your action becomes less of an inevitable result and more of a conscious decision. So with that in mind, go browse the Marchesa sample sale knowing what your purchase means on a much larger scale. You make a statement with your dollar. In this case, it’s a statement of support for yet another woman who’s been screwed over by the patriarchy. All in all, I say that’s worth a swipe of my Amex.

Posted by Staff Writer at 01:16 AM
Our Views and Opinions |