The Outrageous Amounts Celebs Get Paid for Tweeting and Appearances

It’s tax season, and you know what that means: Numbers running amok in your head while dining, during your favorite TV shows and perhaps even while you sleep. Chances are you’ve spent the better portion of the new year frantically scouring bank records and shuffling through the Mount Doom of personal receipts you stuffed into a folder throughout 2011.

I’m here to invite you to a brief break from the number crunching. Instead of worrying about your own taxes, let’s reflect — if only for a moment — on the kinds of numbers that rich celebs have to sort through with their CPAs come tax season. Even the most trivial, every day occurrences in celebrity’s life may have to be claimed on their taxes.

If you were a celebrity, how much would 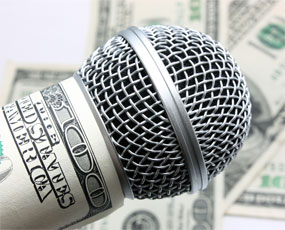 you expect to get paid for a single, solitary, 140-character count tweet? Now multiply that number times at least 100.

According to an online report by New York Magazine, celebs get paid a ton of money just for tweeting. For example, Kim Kardashian gets paid $10,000 for every Twitter endorsement she makes, including those for ShoeDazzle. And if that number wasn’t mind-boggling enough, get this: 2011’s most notorious winning celeb, Charlie Sheen, was paid a whopping $50,000 for his Twitter tweets. The kicker? He didn’t even write them himself, but still relished in the sweet, sweet green.

Imagine getting paid big bucks just to show up at a party and have fun. Now that’s truly the American dream. Celebs get paid anywhere from a few thousand per appearance to over $100,000. The amount paid, of course, directly relates to the celebrities fame.

For example, top celebs such as Lady Gaga, Beyonce and Fergie all earn over $100,000 for their appearances and “it” girls, such as Zoe Saldana, Leighton Meester and Lea Michele, earn around $25,000 for their presence. Even celebs who haven’t acted since the ’90s and hot reality stars (e.g. Real Housewives) get paid around $5,000 just for being at a party. As for minor reality stars, including The Biggest Loser participants and former MTV’s The Real World contestents earn roughly $500 for showing up at car dealerships, salons, malls and even university speaking gigs.