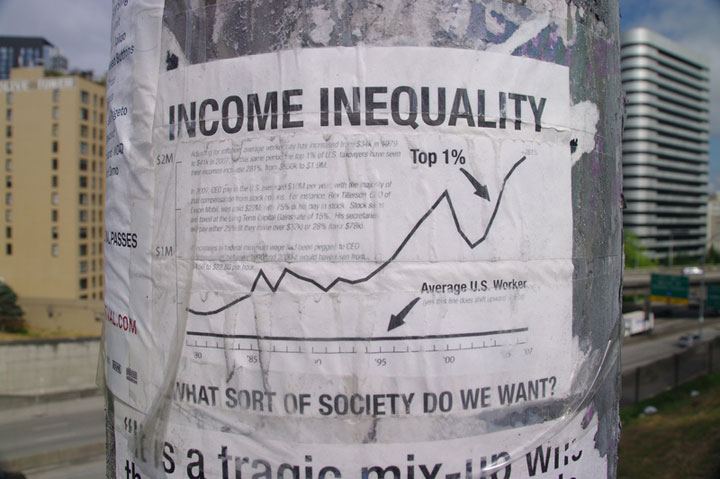 Oxfam America recently released a new brief stating that, by the year 2016, the richest 1% of the world will have more money at their fingertips than the remaining 99% combined. This new issue brief, published in January 2015, “outlines how the richest 1 percent of the world have seen their share of global wealth increase from 44 percent in 2009 to 48 percent in 2014, and will likely surpass 50 percent in 2016.”

Now, this news may make some readers gasp, but most likely it’s followed by a yawn and a, “Yeah? Big surprise.” But before you form any concrete opinions on the seemingly forever expanding inequality gap, first consider how Oxfam’s data may be just a little misleading.

For starters, it excludes both wages and income and instead solely takes into account, “the value of an individual’s financial and non-financial assets, mainly property and land, minus their debts, to determine what individuals ‘own’”, says a BBC report.

Taking all this into consideration, the wealthiest 1% of the world, according to Oxfam, would be any individual who’s worth slightly more than a half million pounds. To many of us, that sounds like a lot — and in the scheme of things, it is.

To put it all into perspective, consider what BBC’s head of statistics Anthony Reuben says: “It is not necessarily talking about people who own yachts and ski chalets. Owning an average house in London, without a mortgage, would just about put you in the 1%.”

Sure, owning a house in London certainly puts you at the top of the bracket where financial value is concerned — especially when you approach it from a global standpoint. That said, it does make for a slightly less dramatic headline, as owning a house in London feels more attainable than, well, owning a frivolous yacht or personal jet (which is the lifestyle we think of when we hear “the 1%”).

If anything guts you regarding this new data, it may be the stark disparity between your average London house-owner and the poverty-stricken poor.

On the one hand, some may argue that the capitalism model is working, and that the rich must be doing something right and to let them carry on. Others, however, find the drastic gap between the rich and poor unsettling. Especially when you consider the fact that one out of every nine people in the world don’t have enough food to eat and that more than a billion — yes, a billion — people live on less than $1.25 a day, says Oxfam.

We want to know where you stand. Read more about the topic here, and then share your opinions on the matter in the comment section, or on our Facebook page.

Related Posts:
9 Snarky Valentine's Day Goods to Make You Guffaw
How to Have Fun in Brooklyn? Walk in Your Favorite Characters' Footstep
M.T.A. Bus and Subway Will Cost You More Thanks to Price Increase
More About SFERRA and Their Upcoming Luxury Linen Sample Sale