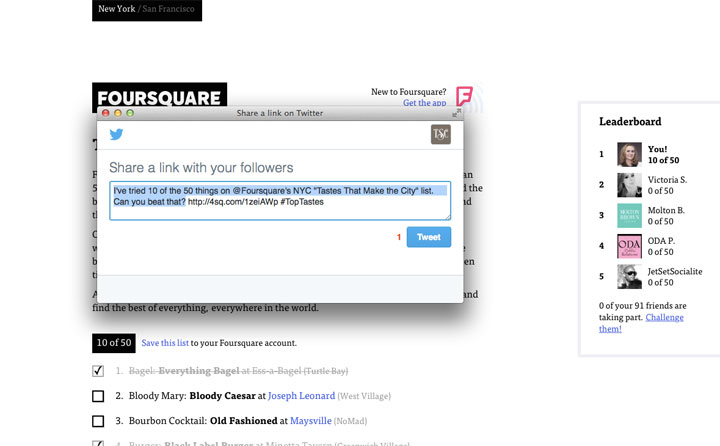 Who doesn’t love to eat? Answer: Nobody. Because everyone loves to eat. The key, though, to happy living and eating, is to only eat food that’s amazing. Calories spent on something less than delightful to your palate are simply a waste, my friend.

That’s why we’re pretty excited about Foursquare’s “Restaurant Challenge,” AKA a checklist of 50 of the best NYC restaurants.

“Foursquare’s team of data scientists crunched the numbers, looking at where more than 50 million people go and what they do,” explains the site. “The result: top trending tastes in New York and the best places to experience them.”

From pancakes to burgers to bagels, from pastries to pizza to ramen, it’s all on the list. Will you take the Foursquare challenge with us? 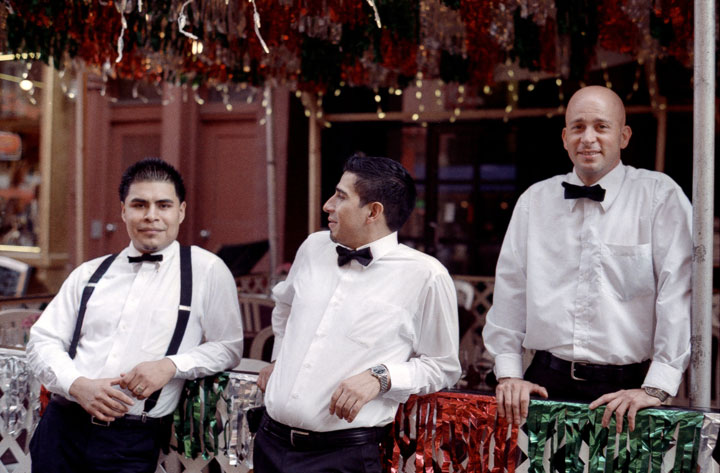 The Wage Board and Governor Cuomo have proposed a wage increase to $8.50 per hour from $4.90 per hour for tipped laborers. While some waiters around the city may be rejoicing, it does spell some major changes for waitstaff, restaurant owners and their patrons.

For example, some establishments are toying with the idea of dropping the tipping system completely, others have discussed cutting employees’ hours, and some restaurants are looking at price increases on their menu upwards of 20%.

Read more about the new legislation and what it means for all involved.

Bleecker Street is perhaps one of the few areas of New York City where the restaurant genre is limited to one specific style of cuisine. Renowned primarily for its Italian eateries and pizza joints, Bleecker makes no apologies for what some passersby might call a “limited” selection. Narrowing it down to the three best pizzerias is much like Sophie’s Choice for any pizza enthusiast, but if you want to sift through the sea of infinite dough, the following establishments are the unequivocal pizza powerhouses.

The obvious choice for any first-timer on Bleecker is John’s Pizzeria (located at 278 Bleecker Street). The no frills appearance of the restaurant could have something to do with the fact that the pizza speaks for itself, or maybe the fact that its walls have been standing since 1929. Either way, this pizza is sure to delight without breaking the bank. The most delectable pie combination comes in the form of pepperoni with sausage, tomatoes, and extra cheese (your pulmonary muscles may not thank you, but your taste buds will).

Roma Pizza (located at 259 Bleecker Street) is yet another one of many charming pizzerias with ambrosial toppings and combinations in the West Village area of Bleecker. What makes Roma Pizza stand apart from other competitors on this street is its “96 hours” philosophy, meaning the pizza makers let the dough rise for ninety-six hours before baking it in the oven. This gives the pizza a lighter air and is actually healthier because of how much easier it is to digest. Another notable fact about Roma Pizza is its location in what was formerly the legendary New York institution, Zito’s Bakery. Preserving the neighborhood feel that shopowner Anthony Zito perfected, Roma Pizza is a welcome addition to the increasingly corporate look of Bleecker Street.

The final contender in this trifecta of perfect pizza is Keste Pizza and Vino (located at 271 Bleecker Street). More upscale and expensive than Roma Pizza and John’s Pizzeria, Keste is consistently ranked as one of the best pizzas in New York, and has several gluten-free options, like the margherita, in addition to the customary flour-laden dough. One of the more expensive pizza restaurants on Bleecker, Keste’s menu features mouthwatering prospects that include the Pizza del Papa (butternut squash cream, smoked mozzarella, yellow peppers, and tomatoes), the Keste (bufala mozzarella, prosciutto di parma, tomatoes, gran cru, arugula, and olive oil), and the Salsiccia e Friarielli (Italian sausage, smoked mozzarella, and olive oil). For anyone crazy enough to pass up this pizza paradise, Keste also has an assortment of salad selections.

And so, to use a pizza metaphor, you can cut straight through the dough by attending one of the abovementioned pizzerias, as they are the most effective dining experiences for guaranteeing you’re getting one of the best slices on the Bleecker block—and in New York.

Partially because Danny Meyer is from my Midwest hometown, and partially because Shake Shack‘s frozen custard shakes rock my world, and partially because I’m a New Yorker, I vote east coast all the way. However, I enjoy a good In-And-Out burger every now and again. Do I wish they would franchise in Gotham? I hadn’t really thought about it until a rare trip to Queens had my taste buds caught in a burger battle.

Petey’s Burger, in Astoria, comes from two Cali-natives who aim to copy (for lack of better words) the infamous In-And-Out burger. Petey’s Burger serves just burgers cooked medium well and dressed with lettuce, tomato, onion and a splash of thousand island dressing. The hand-cut fries are for sure way better than In-And-Out, but not, in my humble opinion, better than my beloved Shake Shack. They are more generous with the cheese, and at least admit that their sauce is thousand island unlike SS, which touts special “shack sauce.” It all tastes the same to me.

Actually, Petey’s Burger rocks and if I find myself in Astoria again someday, I might even go for round two. However, I live in Manhattan; and if you have been living under a rock, Shake Shack has an iPhone app for cutting the line. Case in point that New York food battles are never solely about the food, but the convenience, creativity and the unmatched ability to complicate a rather simple concept in the way that only New Yorkers can.