German-born luxury women’s apparel retailer, Escada, was bought Megha Mittel after filing for bankruptcy in August 2009. Megha Mittal, daughter-in-law of he Lakshimi Mattal (CEO of the world’s largest steel company and 8th richest person in the world), plans to turn the brand from red-carpet only to everyday ready-to-wear.

Maybe that explains the deeply discounted pieces at the Escada Sample Sale, at the Metropolitan Pavilion on West 19th Street. Luxury clothing and some accessories up to 90% off retail values. Yesterday, the apparel section offered a large variety with timeless classics and wardrobe backbones as well as the marked Escada evening dresses. There are many pieces for work, interview or a day of shopping. Our Editor scored a pristine English riding-style jacket for $95 marked down from $950. The accessory selection was slimmer. Shoes were marked down, most of them 90% off retail price.

The sale drew a more conservative crowd of middle-aged, well-dressed professionals, which may explain how the organization remained in tact. Sizes are plentiful and staff are friendly and there to answer questions about sizes, prices and damages. Be prepared to check your belongings at the door. All sales are final.

Retail season is in high gear. Save suffering retailers or humor Victoria Beckham this week...in shopping.

Retail season is in high gear, and we for one are happy for a reason to spend. In November, retail added 7,500 jobs and prepared promotion plans to keep customers shopping right through to twenty-ten. Where to shop? If you aim to save suffering retailers, the red list includes old favorites like Phoenix Footwear (not recommended), Zale, Cache, Bluefly and New York & Co. If you prefer to stick with the winners, Saks, Aeropostale, Movado, Syms, and Liz Claiborne in the black.

Louis Vuitton opened a sig store in Sin City. Talbots announced their plan to merge with BPW Acquisition Group in part to pay for their acquisition of Aeon. Talbots plans to use $300 million of their new money (eh, hem BPW’s money) to pay for the Japanese retailer. Fit experts, Intimacy, are capitalizing on “the Oprah effect” and announced their plan to expand from it’s Upper East Side location to a second store in Midtown East.

On the lowbrow, the ever-expanding Victoria Beckham will debut her new eyewear and denim collection on Net-a-Porter today.

But on the higbrow… or Highline rather. Target pop-up returns to Manhattan Friday through Sunday at Gansevoort and Washington at the entrance of High Line Park. Downtown their rejoicing that this year they won’t be forced to trek to Times Square for a taste of Alexander McQueen. Target-To-Go will offer consumers fifty gifts including limited edition Rodarte for Target a week before they hit Target stores nationwide. Only in New York do we get a first shot at a store we don’t even have. Ha. Ha. Ha.

Posted by Emma Dinzebach at 12:00 AM
bargain news , STYLE/BEAUTY |

What do Jay Z & Beyonce, Anna Wintour, Twitter creator Jack Dorsey and designer Chris Benz and myself have in common? Hint: Not recession-proof bank accounts. We’ve all patroned the Standard Grill since it opened it’s doors to the public almost a month ago. Well, us and thousands of others. Highline Park and the emergence of sunshine mobilized New Yorkers and tourists alike to the Meat Packing just in time to try the new Standard’s Standard Grill. Of course, I didn’t see any of them when I was there, but hey, they didn’t see me either. 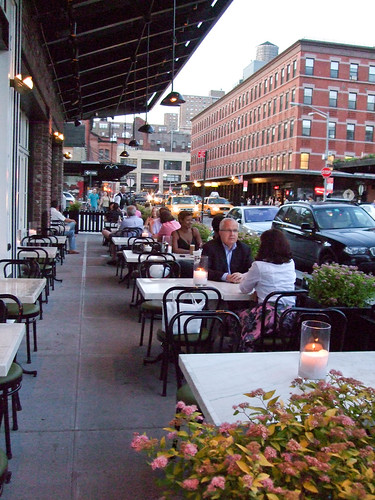 Before writing this review, I browsed through some Yelp reviews to measure my opinion with those of other diners. I found the usual mixture of disses and praises, but thought the reviewers missed a key element of dining at…well, of dining in general. Like writers have to know their audiences, food critics have to know their atmosphere. Gotham is chock full of restaurants with medium food but a great setting. While you may not love Tao, you know the ambiance is your best bet for say, a bachelorette party. While I sought to review the food at Standard Grill, I also, almost equally, sought to measure the environment.

And the floor is tiled with pennies! The Standard Grill found a useful, um, use for America’s most confusing currency. Okay, so they weren’t the first. (The Paul Smith store in Paris has currency tiled walls and apparently some courthouse in Tuscon cashed in on the penny idea several years ago.) But it looks cool. In combo with the vaulted beamed ceilings and cushy red banquets, the Grill’s dining room is nice. As are the patrons – understated trendy and lively, the dining room and adjacent white bar room are packed from 7 to 9 or later, so if you aim dine in peace go early or eat late.
Chef Dan Silverman cooks a mean roast chicken as well as lamb chops and Steak Frites.

I’m from the Midwest, and you know I’m choosy about my steak, but the steak at Standard Grill is actually delicious, cook beautifully and only slightly flavored. All Standard Grill’s meat is locally grown (plus) and prices hover around the low 20’s (plus, plus). The duck fat smashed potatoes are also amazing, if slightly bad for your figure. And the charred octopus is DELICIOUS. It may be one of the best octopus dishes I’ve had. Some friends had the trout, which was flaky and tender and came with pine nuts and currants, which sounds weird, but really worked. For dessert I had the humble pie (rhubarb and chocolate) with vanilla ice cream.

I’m not saying the Standard Grill deserves four stars for amazing cuisine – except the octopus – but it is reasonably priced, fun and has a great outdoor seating area.  I think it’s a worth a visit as the ambiance makes for a fun night any day of the week and the patron’s maintain The Standard Hotel’s measure for cool…meaning it’s cool. We may need that if this summer ever heats up.