If there’s one thing I noticed about the season 6 premiere of AMC’s Mad Men, it had to be the abundance of facial hair. Particularly, the variety of rumpled beards and ultra long sideburns, even on otherwise clean-cut characters such as Pete Campbell. 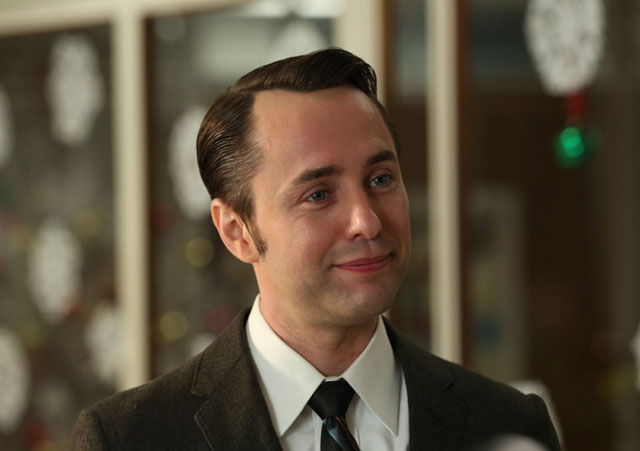 But I digress. I’m not here to talk about the abounding “manscapes” that are sure to become even more prevalent as the season progresses; I’m hear to discuss the clothes and accessories of the first episode. Naturally.

I will say that the slow migration toward the ’70s was ultra apparent in this season’s premiere, and not just because of the scruff and all those “dope” and “reefer” references.

I’ll start at the beginning (though I will skip the weird CPR flashback…). We find Don and Megan lounging it up along the tropical beaches of Hawaii and both look fab in their resort wear digs. For the most part, Don adheres to his sort of stringent, stiff apparel, but we do catch him in a pair of seashell-laden red swim shorts. We also see him stray from his standard suit to wear a pale, avocado green number at the impromptu wedding he becomes a key player in.

It’s Megan’s fashion choices that made me swoon though. I’m just going to say it: the best look of the entire episode was worn by Megan on the beach as she snapped a picture of Don at the wedding. The bold purple and orange breezy number, her floppy lavender sunhat, carefree hair and those round, oversized sunglasses came together perfectly. And I may or may not be buying a pair of those sunglasses in the near future. I need them, okay? 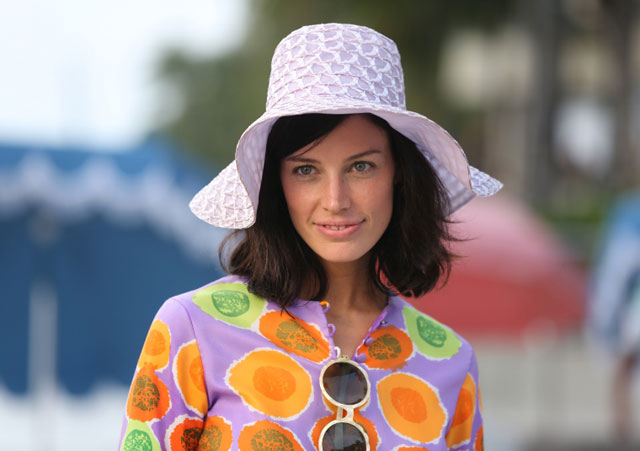 If I’m going in order of the show, the next outfit to highlight is the form-fitting, frilly purple frock worn by fiery-haired Joan. (Note – ruffles are so hot for SS2013.)

Though we only saw a few minutes of our favorite voluptuous character in this episode, Joan definitely made a statement while standing on the staircase waiting to have her photo taken. Even Roger, who’s forever dapper, muttered something about not wanting to follow “that act.” 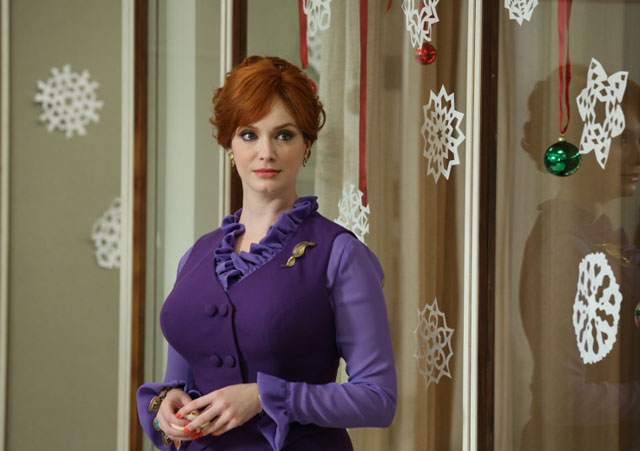 This whole episode was rife with underlying, mysterious messages and nods toward death. Roger’s mother’s funeral was a more blatant moment in the recurring motif. And while somewhat dark, I couldn’t help but fall in love with another outfit, my second favorite of the episode: Jane’s black and white ensemble.

Roger’s second ex-wife made a brief appearance and, my heavens, she looked divine. Her raven hair was swept up tightly and hiding underneath a tall, off-center hat. The kind of hat that belongs on the cover of haute couture magazines. It was paired with the perfectly applied makeup, oversized pearl earrings and non-form fitting, funeral-appropriate sheath.

In my opinion, Jane has sort of always fulfilled the “on the cutting edge of fashion” role in this show. This particular outfit only furthers my point. 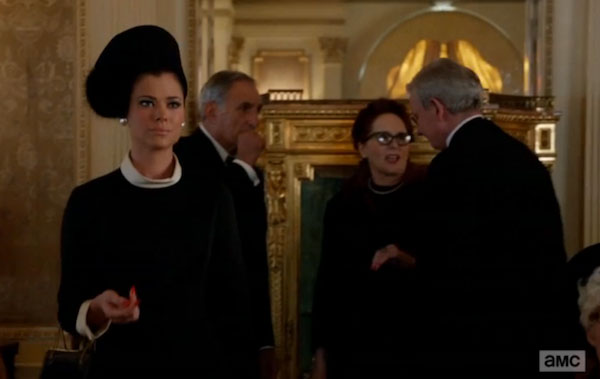 I must admit that I’m excited to see where this late ’60s fashion goes this season. I have a feeling that, in addition to the dapper apparel worn by the Mad Men, we’ll be seeing more of the gritty and gruff sides of fashion that the era was known for, as well. Can’t wait!

Related Posts:
Behind The Scenes Images From NYFW Preparation. Plus Learn How You Can Watch The Shows, Too.
Halston Might Not Be the Greatest Show But You'll Binge-Watch It Anyway
Vivienne Westwood '80s Classics Brought Back to Life by Opening Ceremony
7 Space-Saving Beauty Battle Stations You Can Fit in Your NYC Apartment