Since mid 2008, consumers and retailers alike have heard and read nonstop prattle regarding the state of our national and global economy. From collapsed markets to inflation to increased costs of living paired with decreased salaries, times are certainly uncertain. 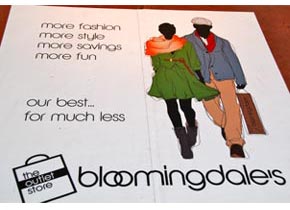 Naturally, consumers are wary of our economy’s current state and have resorted to more frugal tendencies. Even fashionistas who once splurged at Saks are bucking the urge to spend spend spend and are instead squirreling away their cash while wearing last year’s products.

To make money, or at least break even, retailers have had to get creative. Luxury brands like Saks, Neiman Marcus and Nordstrom decided the best thing to do was to extend their brands and begin opening outlets. Their goal? To reach more people — including new demographics — in hopes of resurrecting clientele who appreciate the finer things in life.

The decision to branch out was undoubtedly an intrepid one since nobody knew for sure what would happen after investing in new outlet store fronts. Many were afraid that outlet stores could harm the brand’s name, but the plan has, so far, panned out successfully.

After other stores, including those listed above, tested the waters, Bloomingdales also decided to hop aboard this “branching out” outlet train. They plan to open a cluster of stores in the spring and fall of 2012.

According to Arnold Orlick, Bloomingdale’s senior Vice President of their outlet stores, they will focus on selling the brands of Bloomingdales instead of private labels. They hope that the new stores will draw in aspirational luxury shoppers who don’t want to — or simply can’t afford — the lofty price tags at the traditional stores.

Posted by Mirela Gluck at 12:29 AM
bargain news , In the Neighborhood , Places , SHOPPING , Stores , The City |