When a Girl Goes Green for her Love of a Guy, Not the Planet

“Green, I need green!” was the prompt announcement that my friend Lola made as she flounced into my kitchen with a determined look on her face. Her real name is Louise, but she says that her parents were trying to curse her by giving her a name that would ‘scare all boys away’ and decided Lola was a name more befitting of her. While you might already be picturing Lola as a girl that lives to break all conventions – don’t. Lola has no steadfast or firm rules, which means that she’ll adhere to whichever ones she feels necessary at the time.
“His Grandmother is coming over and it’s her most absolute favorite color. He said she’s never liked any girlfriend he’s ever had, and obviously I need her to like me. Not even for myself, for him. It’s important to him. So important that he mentioned this after he had randomly gotten me one of those expensive raspberry smoothies and croissant thingys from that place around the corner. He’s such a Momma’s boy. Or, Grand-momma’s boy, rather.”

She was frazzled, and had already stolen my bottle of water and downed what had been left. I ruefully wished I had crushed up some Xanax into the water before she’d gotten a hold of it. She needed to harness her inner chi, or at least stop pacing the floor like a madwoman.
The ‘he’ in question here is her fiancee, Seth. Who apparently has a Grandmother with a particular penchant for the color green.

But it didn’t matter – Irish or not, green was the color sought. Lola wanted something new (as for her, almost any excuse to buy something new is a good excuse), so we started up Firefox and began shopping with my expertise and her credit card.

These are our final picks: 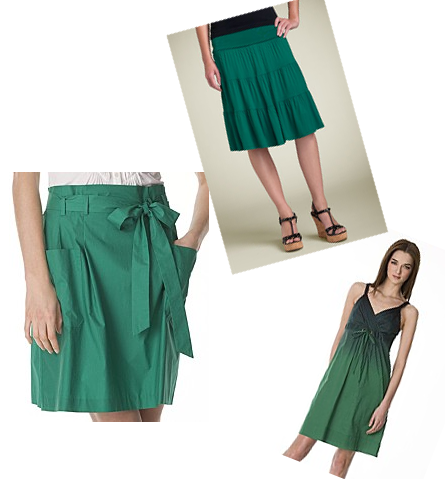