Party like it’s 1965 in the city where the Mad Men worked, smoked, drank and fooled around. After 17 long months, Mad Men is finally back. The fifth season kicks off with a two-hour premiere on Sunday, March 25, at 9 p.m.

Sunday’s episode is called A Little Kiss. Put on your finest 60s threads, blow yourself a little kiss in the mirror, then head out to soak up some authentic Madison Avenue flavor. 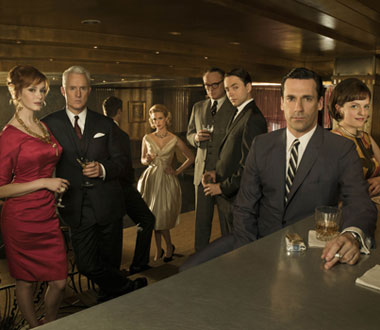 Start your Mad Men weekend off on Madison Avenue itself. The Madison Club Lounge on Madison Avenue and 45th Street, has a clubby atmosphere straight out of the 60s. It’s in the Roosevelt Hotel, where Don Draper stayed in Season 2.

Stop off for afternoon tea from 3 to 5 p.m. at the Two E, the swank lounge in the Hotel Pierre, the hotel where Sterling Cooper Draper Pryce set up temporary offices. When you finish your scones, pastries and tea sandwiches, make plans to come back to Two E on any Tuesday evening for special Mad-Men-inspired cocktails and live jazz.

Have a nightcap at P.J. Clarke’s, the saloon that has been around since 1884, just as the Mad Men did in Season 1

Start the day with brunch, from 10 a.m. to 3:30 p.m., at Peacock Alley in the elegant Waldorf-Astoria Hotel, site of Draper’s meeting with Conrad Hilton. Have some raw oysters and champagne in honor of the Mad Men.

Tonight’s the night! You have a choice of two fab viewing parties, one at the Paley Center, a major organization for television-related events, and the other at the Carnegie Club, a swank cigar bar.

Wear your best retro finery, and enjoy a full evening of groovy Mad Men fun at the Paley Center for Media. Start the evening with authentic period cocktails at 8 p.m. From 9 to 11 p.m., watch the premiere live on a big screen along with your hosts from TV Guide Magazine. Enjoy real ads from the early 60s during program breaks. Test your Mad Men knowledge with trivia quizzes. Take home a poster to remember this special night.

Or soak up the lush atmosphere of the Carnegie Club, as you sip on your Mad Men cocktails and nibble on the  complimentary hors d’ouevres. The Carnegie Club is one of the city’s few cigar bars, where it’s legal to smoke  indoors. You’ll think you went back to the 60s in a time machine! The Mad Men event starts at 8 p.m., followed by the premiere episode shown live on the club’s three new large screen TVs.