Nosey onlookers leaned on metal gates at the H&M mecca on 34th Street and 7th Avenue, watching as crazed shoppers were released into the caged in area in groups of 30, allotted 15 minutes to grab as many Marni pieces as they could handle (which was a lot). Well, let me clarify for a moment:  as many Marni pieces as they were allowed, only two pieces per item, per shopper, a restriction presumably set to prevent online resale at a greater price.

Excited shoppers had lined up hours in advanced, some passionate enough to camp out overnight, in order to land one of 300 wristbands per store. These color-coded bands provided you with a said 15-minute shopping time, increments that lasted up until 11:20AM, where the collection, or what is left, would be unveiled to the public. I spoke to one Manhattan couple who arrived at 8:30AM this morning and was lucky enough to land the last two passes. 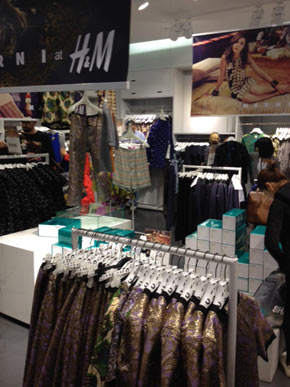 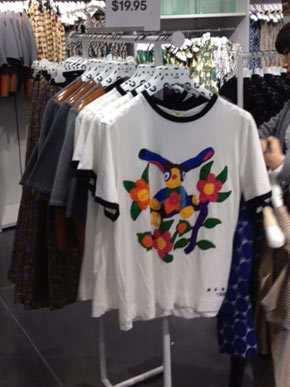 One problem with the two item restriction is, if you are not certain of your size, everything becomes a guessing game since once you leave the gated in area to try on your clothing, you are not allowed back in to swap sizes.  The time limit made indecisive shoppers stressed out, panicking when a sales associated shouted “Down to five minutes!”

The most popular items were those marked with Marni’s signature bubble design. The Black Blazer ($80) and Black Jacket ($130) was at a severe minimum by 9:30AM. Accessories were also the most popular, almost nothing was left after only an hour of shopping, except for the Sunglasses ($20), Men’s Tote Bag ($80) and Leather Sandals ($60). 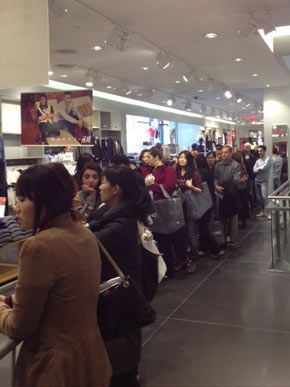 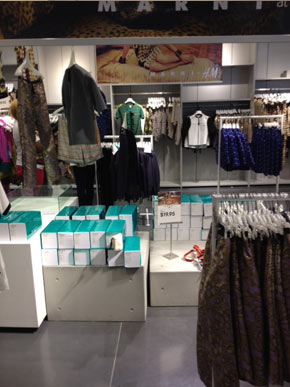 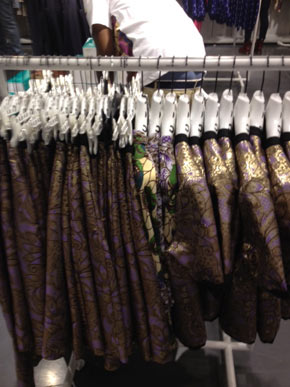 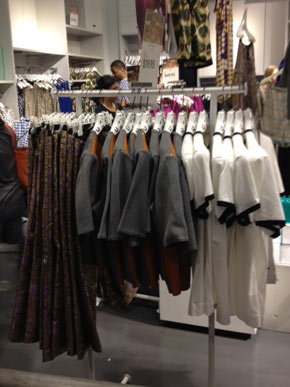 Not many people immediately focused on the Gold Jacquard Weeve Blouse ($80), Gold Skirt ($80), or Patent Leather Sweater ($149). Instead, all seemed to concern themselves with all things green, namely the Parka Style Dress ($149) and Long Silk Dress ($129). The T-Shirts were fun and a huge hit ($19.95), I saw almost everyone grabbing for those in addition to their pile of patterned clothing. 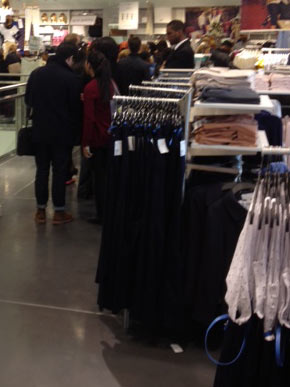 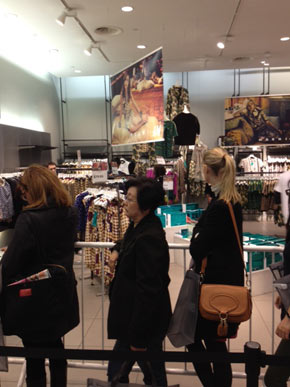 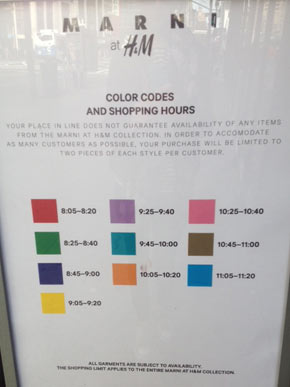 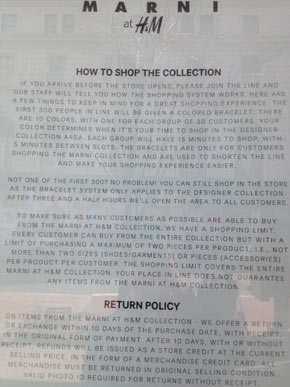 After having my fill of observing a couple rounds of shopping I scoped out the post-shopping scene. Many shoppers were trading sizes and items with each other outside the dressing rooms and some even snuck up to sales associates, whispering pleads for them to exchange an item for them in a larger or smaller size, some complied while others ignored them.

Just two blocks down at the H&M Herald Square location the same madness was occurring, at a mummer level. Less items were featured here, I saw no green, no Parka Style Dresses, no accessories aside from the Leather Sandals, but did spot a rack hanging plenty of the bubble design featured on a Blue Blazer and matching Blue Skirt.

By now the Marni for H&M Designer Collection will be available to the public at various H&M locations in Manhattan, but don’t expect a whole lot left. With the new restrictions, it will be interesting to see how much lands on eBay. Perhaps the new trend may just be posting an ad craigslist, shouting a plea to other unfortunate Marni shoppers with the wrong size on their hand to swap with them. You heard it here first.