[www.dailymail.co.uk]
“He’s gatecrashed fashion shows and made an entrance to remember on MTV. 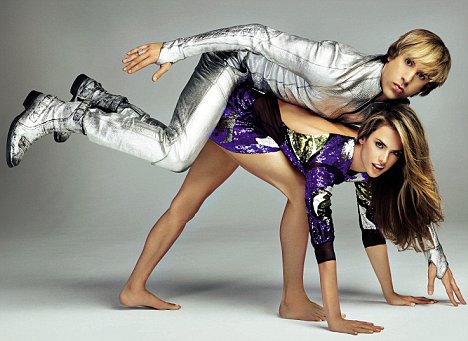 In doing so the fake Austrian fashion critic follows in the footsteps of Naomi Campbell, someone he takes to task in his A-Z of fashion must haves.
‘She’s amazing – 20 years in ze business und all the pressure und fame hasn’t changed her a bit. She’s remained a total b****.’
Fashionably funny: Bruno gatecrashes a Versace-style photoshoot with model Alessandra Ambrosio for Marie Claire magazine

Naomi isn’t the only one to feel Bruno’s claws. Madonna, Pink and Amy Winehouse are all ridiculed in the interview.

Bruno is the brainchild of Ali G and Borat creator Sacha, and features in a mockumentary due out next month.
On Pink he reveals: ‘Just vatching him now on MTV. A great singer und so hunky.’
Winehouse is ‘… not too skinny, in fact, for ein junkie she is actually zehr fat.’
And as for Madonna, he claims L is for ‘Little black child… thanks to Madonna… it’s zis season’s vardrobe essential.’
It’s all enough to make a supermodel tuck into a big bar of chocolate.

And Bruno even takes time to crack jokes about his ‘countrymen’ Adolf Hitler and Josef Fritzl.
He says A is for Austria, where people are raised to ‘try und achieve ze Austrian dream – find a job, get a dungeon und raise a family in it.’
And K is for ‘Kampf, mein… ze fashion bible written by Austria’s black sheep Adolf Hitler. It literally translates as ‘My Flamboyance’.

In an accompanying fashion shoot Bruno recreates a Versace advert in a silver leather jumpsuit, along with model Alessandra Ambrosio.
Poser: Sacha Baron Cohen, dressed as Bruno, arrives at the 2009 MTV Movie Awards in Los Angeles
He shows off his unique sense of style in hot pants and leopard print, but at least he leaves Borat’s mankini at home. 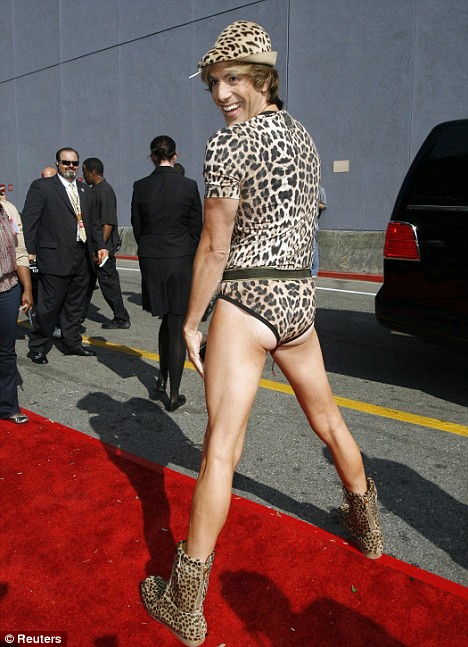 On Sunday night Bruno made an astonishing entrance at the MTV Movie Awards – dropping into the room from a wire and landing head first in Eminem’s lap. The rapper appeared to storm out in protest – although this was later revealed to be a rehearsed stunt.
And last year he gatecrashed Paris and Milan fashion weeks, climbing onto the catwalks – where he persuaded a designer to say the unfashionable should be sent to concentration camps to be taught how to dress.
Like Baron Cohen’s hit film Borat, Bruno takes the style of a faux documentary, with the comedian putting unsuspecting interviewees through a string of awkward situations.
Those caught out this time are rumoured to include Arnold Schwarzenegger and Ben Affleck. ” ”
By Lizzie Smith
Last updated at 2:25 PM on 03rd June 2009
[www.dailymail.co.uk]