A key feature of the perfume market over the past decade or so has been the emergence of celebrity-endorsed fragrances. Though sometimes these are fragrances come from established designers that celebrities simply put their names to, it is becoming more and more common for stars to produce their own fragrances independently. Nowadays it seems that everyone who’s anyone has their own pretentiously-named fragrance. 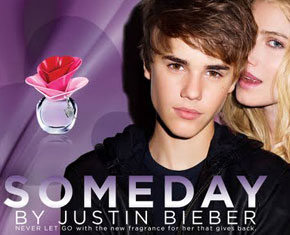 For instance, back in 2004 Britney Spears released her first fragrance, Curious, manufactured by Elizabeth Arden. Since then celebrities have started to shun designer associations, allowing them to reap more of the profits for themselves. A good example is Justin Bieber’s Someday, gallons of which is being snapped up by teenage girls as we speak. Big pharma producers like Proctor & Gamble help some of these celebs – Avril Lavigne is one example – to produce their scents, but the major designer brands that have traditionally dominated the market, such as Escada and Calvin Klein, have largely been left behind.

As the Fragrance Foundation states on their website: “Celebrity brands are driving market growth among younger fragrance users. Over 30 new celebrity fragrances were launched in 2007 alone. One in five 16-24 year olds claim to own at least one, compared with one in twenty over-45s. Celebrity fragrances provide the entry point for young people into the whole luxury sector.”

What does this say about the average consumer’s relationship to their perfume of choice? Clearly, an industry pedigree is not a requirement for many. After all, what qualifies Justin Bieber to say what scent is best for women. Nothing, clearly, but his massive popularity seems to be all it takes to shift unit after unit. So if all you need is a big fan base to get bottles of your fragrance selling like hot cakes, then how does the traditional base of designer fragrance manufacturers tend to counter this trend – what can they do to put their products back in the spotlight?

Some established labels are taking lessons from the stars and partnering with big manufacturers, like Escada who have done a deal with the above-mentioned Proctor & Gamble Prestige. The new scent, Especially Escada, is described by Women’s Wear Daily as “a rebirth in line with the regeneration of the Escada brand.” The brand is leveraging its use of bright colors and “an almost wholesome high femininity” to push itself forward.

These efforts from Escada have been coupled with a major marketing push, where they are planning “an “unprecedented” interactive digital campaign, along with special in-store supporting materials.” Bear in mind that all this promotion is being done well in advance of the fragrance’s release – it doesn’t come out in the United States until September – so it’s clear they are trying to generate some serious buzz to counteract the easy publicity that celebrities and other established brands take for granted.

Calvin Klein has been a producer of popular fragrances for many years, making the idea of a unisex fragrance a mainstream trend. However they are shaking things up this year with the release of CK One Shock. In what WWD describes as “a departure for the brand,” Shock is designed to appeal to the teenage/young adult demographic, as opposed to CK’s traditional consumer base of of 35 to 45 year-olds. This is a clear indication that they are trying to regain influence in the same market sector that the likes of Justin Bieber’s Someday is now dominating.

“This is also an opportunity to bring back the U.S. consumer, as the brand has had greater strength in Europe lately,” said Thomas Burkhardt, vice president of global marketing for Calvin Klein fragrances, speaking to Women’s Wear Daily.

Ultimately, it is unclear if the success of celebrity fragrances will endure. We all know that the popularity of an individual is much more fragile than that of a designer label, so our money would be on the designers to outlast any particular celeb scent. In fact, according to the Fragrance Foundation, a major factor in the success of celebrity brands is their disposability – consumers aren’t likely to make a long-term attachment to any such brand. But the problem for traditional manufacturers is that there is always a new celebrity to fill any gap left by another, so they may have to share shelf space with celebrity-endorsed  fragrances for some time to come.

What do you think about this competition in the perfume market? Are you more inclined to go for an established brand, or does a celebrity endorsement sway you towards a particular product? Let us know!