Battle of the Mexican Corn

La Esquina vs. Cafe Habana in the Battle of the Mexican Corn.

Remember when you had a t-shirt that said “Team Aniston” or “Team Jolie”? Imagine one with a corn on the cob sketch and printed on the bottom “Team Habana” or “Team Esquina.” Which one would you buy? I know; it’s a really hard question, but one I was set on solving. Having resided in Nolita for the past five years, I’ll give it to Cafe Habana for being the neighborhood corn making veteran. But this is New York! And what are we if not competitive. So along came La Esquina and their hoity toity downstairs and Yukons parked outside and yadda yadda and John Mayer looking all fine. 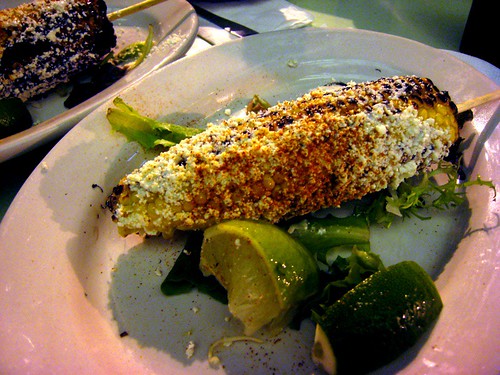 Unfortunately, it took me a while to warm up to the idea of friendly on top, snobby on bottom. (And being a neighborhood regular, I never even experienced the snobby on bottom first hand. Thus, it took me a bit to warm up to “Skeener,” as my brother calls it. But once I did, I realized there are some wonderful palate pleasers Skeener does that Habana does not. For instance the soup and the chicken tacos with cabbage. On the other hand, no one rivals Habana’s mole or the rice and beans or the Cuban pork sandwich.

Ah, such the dilemma. Well, fortunately there is enough difference – after all, Habana is Cuban – that one isn’t forced to make a decision unless, you want corn. If you have never had the corn, then honestly, you are not a New Yorker or you’ve had braces since moving to Gotham. It is buttery, spicy, limey deliciousness dipped in Mexican cotija cheese. So here it goes, the face off, the battle, the true but biased, somewhat honest testament to years of research on who has the best Mexican corn. 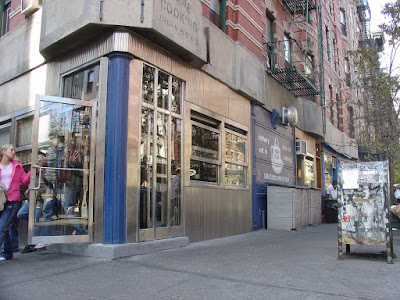 Personally, I like when the corn is a little charred on the outside, and sometimes Cafe Habana doesn’t really get enough char action for me. Buuuut… the guy who makes it and has that big barrel of corn and just keeps grilling it and grilling it all day long is just so sweet. I don’t think they sell as much corn at Skeener, but it could also be because the order comes with just one corn, not two. At Cafe Habana there are two corns per order, which is an advantage unless you’re ordering by yourself because you will eat both. Don’t let the word corn fool you. It may be a vegetable, but Mexican corn is no health food.

Delivery: Cafe Habana wins hands down. I think the foil paper La Esquina wraps their corn in keeps the heat in too much making the kernels a bit mushy. I live super close to La Esquina, so if it gets mushy in the block and half to my apartment I can’t imagine living on Houston and Mott.

But when someone asks me which I prefer, right off the top of my head I say La Esquina. I’m not sure why. Maybe because it is always perfectly charred…? Or maybe because it’s closer to me. If Cafe Habana could consistently char their corn properly every single time, then maybe… Ah, hell. It’s a tie.