Barneys! Judging from the racks, my silent conspiracy has worked. It looks like not many people have been shopping the Warehouse Sale. I noticed many of the same items I had seen last Wednesday, February 23, and they have also restocked. When I dropped by Thursday evening, shoes/boots were at 60% off, designer clothing was at 40%, casual pants were at 50%, accessories were at 40%. Most of men’s were at 50-60% off. There was more merchandise than I had seen at this close to the end. They may slash prices again on Friday (as they have often done, if so please leave a comment, reader!) There was NO line. The only place that looked very busy was the shoe section.  It has been a long time since shoes have gone to 60%. I did not buy any this year, as I was not so impressed with the selection, but I did pick up a beautiful Alabama Chanin Coat that I had been eyeing and that once went for $1,400, and I picked up for $191, and a Mischa Lampert hat for $27! Could I have waited till tomorrow? A probable additional discount? Yes. But, my mantra this week? I am living in an abundant universe. 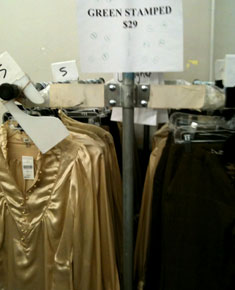 In sum, if you spotted something at the sale, as I had, good job. You waited it out. Now go, chances are, it will be there at a much more affordable price.

Who doesn’t love Barneys New York Warehouse Sale? I have been to every warehouse sale they have had for the past 4 years, but usually on the last day. One season, the shoes were marked 75% off of the redlined price. It was a new experience to walk in there during the first week of the sale. There were no extra percentages off the redlined price. Not for the ladies, only 25% off the clearly marked irregulars. Almost all of the handbags are irregulars.

Including an Alexander Wang Rocco I found for $349, but, it was slightly torn at the bottom. For men’s most everything was 25% off (casual sportswear, outerwear, and designer). Gift and home, with mostly Christmas decorations was 25% off. There was also a “Green Stamped” section off our styles of terribly unflattering skirts and shirts for $29 a pop.

I was not so impressed with the women’s RTW selection. Nor were the tightly spaced pants anything spectacular. Mostly, skinny pants, and leggings, and a few pleated styles. The designer section was, of course, the one with the most beautiful stuff, and nicely assorted

by designer, so it was easy to navigate. The average price for most everything in that section was about $300-350. There was a sweater section, with a terrible selection. One would fare much better with a thrift store sweater. There was a denim section, which always seems to last up until the last day. Also, as always, a great selection of scarves and bikinis.

They moved the merchandise from the previous sales, women’s clothing and accessories are all downstairs, in an a poorly lit space (the dressing rooms are also badly lit, but at least there is makeshift one akin to many sample sales). One a positive note, It looked like they had hired more employees, and there was much more space. Shoes (unimpressive selection) were still upstairs.

I seem to recall that the prices of the Warehouse Sale, before additional reductions, are almost identical to their in store sale (this year they have taken almost all sale items off their website, so I cannot verify). So, it really does pay to wait until the last few days. There are always gems at Barneys. That is when I will be back, when, judging by past sales, discounts may be reduced another 50%. They are bringing in more merchandise, they say. They will not be able to tell us exactly when they will be taking further reductions.

Posted by Bindra at 02:43 AM
bargain news , Sample Sale Reviews |